Homepage > Blog > How much time for conceiving a child with IVF Treatment?

Couples faced with infertility can seek treatment at top IVF center in India. In fact, best IVF clinics in India are worth visiting as well as best ranking IVF centers in Hyderabad.

Childless couples are keen to get adequate information about IVF treatment. They are keen to know more about fertility, how it affects health, mind as well as body and also about going through the IVF process. By visiting top IVF center in India these couples can certainly know more about IVF.

Often several people do not know that fertility dramatically tends to decline between the ages of 35 and 39.

Women do face the decline in fertility rate as she ages, from 21 to 45, and there is need to be aware of knowing more about fertility timeline. 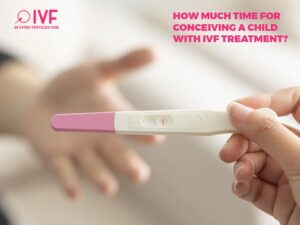 Girls indeed born with a certain number of immature eggs, which can rather be in millions at birth, but this number tends to soon decline as she gets older. Know more about this at best IVF clinics in India.

By the time the girl reaches adolescence that number does drop to about 400,000 and by the time she turns 37 the total number turns out to be about 25,000. In fact, each month a woman produces an immature egg , it will mature and be released at ovulation, the rest of the eggs that are not released tend to die and get re-absorbed by the body.

It is understood that the most optimum time for fertility happens to be between the ages of 21 and 31, assuming of course, there are no underlying issues, and there is a good chance that a woman will become pregnant naturally in this time span after one year.

Women aged 31 to 35 will rather see a decline in their fertility, as the quality of eggs do get poorer as she gets older.

At the age of 35 fertility does decrease tremendously and women who are trying for a child may rather require assistance to conceive.

Once a woman does approach the age of 43 she has about five to ten per cent chances of getting pregnant making use of her own eggs and may also need to consider donor eggs.

The percentage of a woman at this age using donor eggs is much higher as the donor is usually a young woman in her 20s.

A woman aged 45 plus is rather unlikely to get pregnant naturally, as her body is rather preparing for menopause and her egg reserve will be at its lowest levels. The percentage of women getting pregnant at this age is no doubt less than two per cent.

There are several reasons why a woman struggles to conceive naturally including conditions such as endometriosis, polycystic ovarian syndrome (PCOS), fibroids, blocked fallopian tubes, Asherman’s syndrome and so forth.

Other factors for not being able to conceive can be lifestyle choices, such as smoking and also having a high BMI due to lack of proper diet and exercise.

One in six couples tends to suffer with infertility, and it is also estimated that there are 48.5 million people across the globe who happen to be struggling to have a family.

Men can indeed remain fertile for several years longer as compared to women, though sperm quality can also decline as the man gets older.

Best ranking IVF centers in Hyderabad can provide appropriate information about fertility rate of men and women relating it to their age factor. After all, prior to having a child, childless couples need to know all the facts about fertility and how to overcome infertility as well. IVF clinics are the best place to gather required information.

Previous StoryHow much time for conceiving a child with IVF Treatment?
Next StoryDos Don’ts prior and after In-Vitro Fertilization treatments