Caffeine is no doubt a stimulant that does provide a boost of energy and makes one feel more alert.

It is consumed worldwide, with coffee and tea being two of the most popular sources.

While caffeine is indeed considered safe for the general population, health authorities do advise limiting one’s intake when expecting.

How safe is it?

However, caffeine can indeed cause negative side effects in some and may also pose risks during pregnancy.

Caffeine is indeed proven to improve energy levels and focus.

Research does show that caffeine does stimulate one’s brain and central nervous system, which may also help one stay awake and sharpen mental alertness. It may also be rather effective at treating headaches when combined with pain relievers, such as acetaminophen.

Some caffeinated beverages do contain antioxidants, beneficial compounds that can also protect one’s cells from damage, reduce inflammation and ward off chronic disease.

Green tea is especially high in antioxidants, but other teas, as well as coffee, contain substantial amounts as well. 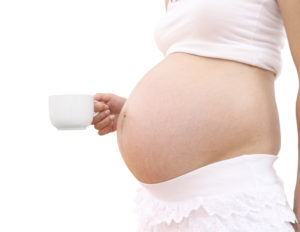 Caffeine has no doubt several potential benefits, but there is also concern that it may be harmful when consumed during pregnancy.

Pregnant women do metabolize caffeine much more slowly. In fact, it can take 1.5–3.5 times longer to eliminate caffeine from one’s body. Caffeine also crosses the placenta and does enter the baby’s bloodstream, thus raising concerns that it can affect the baby’s health.

Moderate amounts of caffeine less than 200 mg per day are not linked to an increased risk of miscarriage or preterm birth.

However, research suggests that intakes greater than 200 mg per day may raise the risk of miscarriage. There is some evidence that suggests that even low intakes of caffeine may, in fact, result in low birth weight. For instance, one study found that low intakes of 50– 149 mg per day during pregnancy were associated with a 13% higher risk of low birth weight. However, more research is indeed required. The risk of miscarriage, low birth weight and other adverse effects due to higher intakes of caffeine during pregnancy does remain largely unclear.

Caffeine may also boost energy levels, improve focus and also help relieve headaches. However, it may pose risks when consumed in high amounts during pregnancy, such as an increased risk of miscarriage as well as low birth weight.

The recommended amount of consumption is that the intake needs to be up to 200 mg or less if one is pregnant or trying to become pregnant. Much depends upon the type and preparation method, this is equivalent to about 1–2 cups (240–580 ml) of coffee or about 2–4 cups (240–960 ml) of brewed tea per day. One needs to limit one’s intake.

Previous StoryCervix Position in Early Pregnancy
Next StoryIVF or ICSI? Use of Artificial Reproductive Technique