Patients can choose to visit the top IVF center in India for Tube Reversal or In-Vitro Fertilization. In fact, the best IVF clinic in India can do the needful. It is worth visiting these clinics.

Tubal reversal, known also as tubal sterilization reversal, tubal ligation reversal, or even microsurgical tubal re-anastomosis, happens to be a surgical procedure that can rather restore fertility to women after a tubal ligation. By rejoining the separated segments of one’s fallopian tube, the tubal reversal can rather give women the chance to become pregnant again. In a few cases, however, the separated segments cannot really be reattached to each other. In again few cases, the remaining segment of the tube does require to be re-implanted into one’s uterus. In other cases, when the end of the tube ha rather been removed, a procedure referred to as a neo-fimbrioplasty must be performed in order to recreate a functional end of the tube which can then act such as the missing fimbria and also retrieve the egg that has been released during ovulation.

Top IVF center in India can provide necessary treatment for couples to deliver a healthy child.

Tubal Reversal does imply that in most instances the technique is an outpatient or rather short-stay procedure thus making use of a small abdominal incision as well as microsurgical techniques in order to restore the connection between the interrupted tubal segments.

The decision between IVF as well as the tubal reversal is indeed highly difficult to make and is affected by the factors of age, cost, and time and also by the presence of other potential existing infertility problems. Each couple faced with this decision need to be assessed as well as counseled individually in order to ensure the selection of the treatment option that happens to be best suited to them. 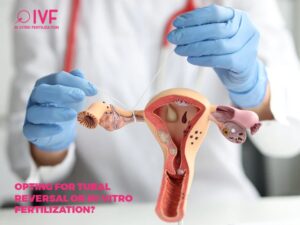 Patients can visit the best IVF clinic in India for proper treatment.

What are the options if sterilization is reversed?

Many varied choices are there depending upon what a couple seeks out in terms of delivery options. Several factors may indeed influence the decision-making process. Generally speaking, the categorical options are either surgery in order to reverse the sterilization (tubal reversal) or in vitro fertilization (IVF). Which process turns out to be the least expensive?

For several patients, tubal ligation reversal surgery can rather be more affordable, more successful, and can also provide more chances of becoming pregnant than can in-vitro fertilization (IVF).

Infertility specialists have often consistently supported tubal surgery as a treatment for tubal ligation as well as tubal blockage.

Chances of Pregnancy with IVF

What are the options for couples desiring to conceive following tubal sterilization?

Circumstances do change, priorities also and family-building goals may be adjusted accordingly.

That is why most women despite having consented to permanent sterilization, do request information regarding fertility options.

The options are either surgery to reverse the sterilization (tubal reversal) or perhaps in vitro fertilization (IVF).

The decision between IVF and a tubal reversal is no doubt difficult to make as several factors may influence the decision-making process. such as age, cost, time as well as the presence of other potential infertility problems.

The aim needs to be toward parenthood and to seek professional advice from experts, who have rather performed thousands of IVF cycles and dealt with tubal reversal surgeries. This helps guide the couples via the process of choosing which procedure tends to bring the best chance of conceiving successfully.

The top IVF center in India has excellent facilities.

Previous StoryThe Benefits of a Nutrient-Dense Diet and Fertility
Next StoryHow much time for conceiving a child with IVF Treatment?