The best IVF center in India is known for its professional approach to patients. The fertility center in Hyderabad can provide the best infrastructure for IVF.

IVF or in Vitro fertilization is indeed a boon to mankind as it does help infertile couples to conceive. Egg donors happen to be an essential part of several couples’ IVF journeys. Couples who are unable to produce their eggs on account of various reasons can choose the route of IVF with egg donors. The fertility center in Hyderabad will provide all requisite information. The best IVF center in India knows it all.

In this process, eggs do get mature in the donor’s body via fertility drugs. After maturity, eggs are harvested from the donor’s body through a needle guided by ultrasound. The harvested eggs can then be fertilized with sperm in a petri dish and then placed in the mother’s uterus or frozen for future use.

There is a lot of information that is required to get before opting for IVF with egg donors. The pros, as well as cons, need to be thoroughly weighed before making any decision.

When does one need an egg donor?

These happen to be the situations in which IVF with egg donors can be considered. 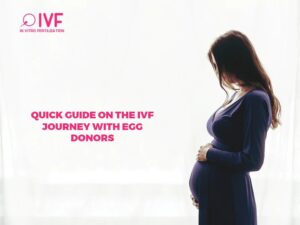 Where can one find egg donors?

The most common sources via which the patient can find the right egg donor for her pregnancy are IVF Centre, Egg donor agencies, Egg banks, a friend or family member who refers to donate, or extra eggs acquired by other infertile couples who are trying to conceive.

Fertility hospitals in Hyderabad can help to find a more mature and de-stigmatized approach to IVF treatment.

What are the benefits of using an egg donor for IVF treatment?

What are the problems faced in opting for Egg donation?

There are certain egg donor problems as well as risks involved in a sensitive process such as this. The donor does require consuming fertility drugs to produce eggs, which might have some side effects. Ovarian hyper-stimulation syndrome is an issue worth noting. Certain psychological issues might also tend to appear in the donor and therapy needs to be considered in any such cases.

Other physical issues that might occur during the process can be treated by a general physician.

What is the general cost of egg donor IVF?

The average affordability of donor egg costs in India varies differently for couples from different income groups. On the whole, the treatment is rather affordable. Egg donation can also be considered with the assistance of a donation from one’s own family or friends.

What is the success rate of egg donor IVF?

The donor egg IVF success rate in India is 60-70% on average. The success rate has rather highlighted an increase in the past few years, which does show an upgrade in the treatment process.

Patients can get themselves treated at best IVF center in India