Homepage > Blog > What is chromosome genetic testing for IVF?

In case of opting for IVF, the patient may be offered a test to look at one’s embryos’ chromosomes. Pre-implantation genetic testing for aneuploidy (chromosome abnormalities), known as PGT-A, is meant to choose embryos with the right number of chromosomes.

Also, an embryo may indeed be screened or tested for a specific genetic condition such as spinal muscular atrophy, cystic fibrosis, and also breast cancer. There are several genetic testing options available.

PGD (Pre-implantation genetic diagnosis) happened to be another type of genetic screening which does detect the presence of genes for specific diseases.

PGD is now known as PGT-m. The M is for monogenic (or single-gene) disease. 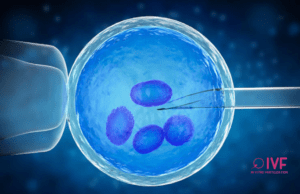 THE PROS OF IVF GENETIC TESTING

THE CONS TO IVF GENETIC TESTING

The number of embryos suggested for transfer much depends on the odds of success.

Eggs collected from women in their twenties and early thirties usually result in high numbers of genetically competent embryos.

If the patient reason for undergoing IVF happens to be blocked fallopian tubes and the patient has had previous pregnancies, PGT may not indeed help increase the odds of success.

IVF can rather be very expensive and PGT is an additional expense. PGT is not a perfect method. If a person is looking to reduce the cost of an IVF cycle and prefers a frank discussion with the doctor about the pros and cons of genetic testing, it is better to consider not testing the embryos. This is not only cheaper but could mean moving onto a transfer and also hopefully pregnancy faster than if you had to wait for the results.

Choosing to perform genetic testing on embryos is indeed a highly personal decision that needs to be decided upon by the patient and the physician.

Previous StorySuggestions to power through IVF Journey
Next StoryWhat is IVF treatment for pregnancy, and how does it work?